Medical and Health Idioms and Quizzes 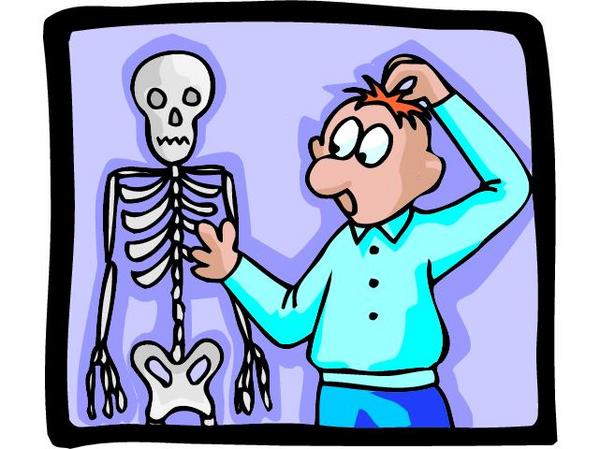 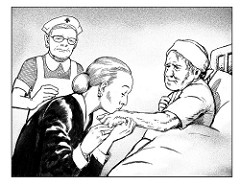 - to be well and healthy

My aunt is ninety years old and she is very much alive and kicking.

- to be well and healthy

The worker was alive and well after the accident.

as fit as a fiddle

- to be healthy and physically fit

My grandfather is ninety years old but he is as fit as a fiddle.

as pale as a ghost

My grandfather was as pale as a ghost when he entered the hospital.

as pale as death

The woman in the hospital waiting room was as pale as death.

The sales manager was at death's door after his heart attack.

back on one's feet

My mother is back on her feet after being sick for two weeks.

- an unpleasant fact that one must accept

Losing the election was a bitter pill to swallow for the candidate.

- bruised, showing signs of having been physically harmed

My arm was black-and-blue after falling down the stairs.

- to lose consciousness, to faint, to pass out

The football player blacked out after being hit by the other player.

- to lose control of one's emotions, to have a nervous collapse

The woman broke down while the lawyer questioned her at the trial.

break out in a cold sweat

- to perspire from fever or anxiety

I usually break out in a cold sweat when I have to make a speech.

break out in (something)

- to begin showing a rash or other skin disorder

I broke out in a rash after eating the shrimp at the restaurant.

The man breathed his last after a long illness.

- to restore someone to health or consciousness, to cure someone

The medical workers were able to bring the man around after the accident.

- to restore someone to consciousness after anesthesia/hypnosis/fainting

We tried hard to bring the woman to after the car accident.

- a very nervous or anxious person

The woman is a bundle of nerves after looking after her three children.

After working long hours for many months the woman finally burned herself out.

I caught a cold last week and had to miss four days of work.

The little boy was told to be careful in the rain or he would catch his death of cold.

- an examination of a patient by a doctor

I plan to have my annual check-up next week.

- a report or certificate that a person or animal is healthy

My doctor gave me a clean bill of health when I visited him last month.

come down with (something)

- to become sick with something, to catch an illness

My niece came down with a cold and was unable to visit me last week.

The man was sent to see a couch doctor because of his many problems.

My grandfather was very old and he died a natural death.

a dose of one's own medicine

We gave the boy a dose of his own medicine after he bullied us.

- to make someone bleed, to get blood from someone

The doctor decided to draw blood from the patient in order to check his blood sugar level.

The bus driver dropped dead while driving the bus.

- to become sick or ill

The man fell ill last winter and has not recovered yet.

- to feel well and healthy

I feel fit so I plan to go for a long walk this weekend.

feel on top of the world

I have been feeling on top of the world since I quit my job.

The man went to the drug store to fill a prescription.

- to begin again suddenly (an illness or a disease)

My mother's skin problem flared up when she started to use the new hand soap.

- a sudden worsening of a health condition

There was a flare-up of my father's sickness last week.

get a black eye

The boy got a black eye when he fell in the playground.

get a charley horse

- to develop a cramp in the arm or the leg

The swimmer got a charley horse while he was swimming.

- to receive a physical examination from a doctor

I go to the doctor every year to get a checkup.

- to overcome a difficulty, to recover from an illness or shock

The woman is having trouble getting over her father`s death.

I got sick yesterday and did not go to the movie.

get (something) out of one's system

- to get rid of the desire to do something

I went on a short holiday so that I could get travelling out of my system.

The boy was sick but now he is getting well.

The woman gave birth to a baby boy last night.

go under the knife

- to have an operation in surgery

The woman went under the knife at the hospital last evening.

green around the gills

My colleague was looking a little green around the gills when he came to work today.

- to open an office or business - especially in a profession

The doctor decided to hang out his shingle as soon as he finished medical school.

have a physical (examination)

- to get a medical check-up

Our company sent all the employees to have a physical last week.

- to embarrass oneself through a silly mistake

The man has foot-in-mouth disease and is always saying stupid things.

have one foot in the grave

- to be near death (usually because of old age or illness)

My uncle is very sick and has one foot in the grave.

The man went to see a head shrinker after his recent problems at work.

in a family way

- pregnant, going to have a baby

Our new secretary is in a family way and plans to stop working soon.

My grandfather is in very good shape.

- a woman going through childbirth

The woman was in labor for three hours.

- a disease that seems to be getting better

The cancer of my neighbor's mother has been in remission for several months.

The patient was in surgery for several hours this morning.

in the best of health

My father has been in the best of health for many years.

My grandmother is in the pink and is doing very well.

just what the doctor ordered

- exactly what is needed or wanted

A nice hot bath was just what the doctor ordered after my long day at work.

- to break or stop a bad habit

The man used to smoke but he was able to kick the habit.

- a cramp in one's neck that causes pain

I woke up this morning with a kink in my neck.

lapse into a coma

The woman lapsed into a coma soon after the accident.

look the picture of health

- to be in good health, to look very healthy

My uncle looked the picture of health when I saw him last week.

nothing but skin and bones

- to be very thin or emaciated

The young man was nothing but skin and bones when he returned from the long camping trip.

nurse (someone) back to health

My mother spent several weeks with my grandmother trying to nurse her back to health.

The woman has been on medication for many years.

My grandfather is on the mend after he broke his leg last week.

an ounce of prevention is worth a pound of cure

An ounce of prevention is worth a pound of cure and I decided to stay home and rest rather than go out in the cold with my sore throat.

- unconscious, to have fainted

The patient was out cold because of the anesthesia when he entered the operating room.

- not in good physical condition

I am out of condition and I need to exercise more.

- not in good physical condition

My mother is out of shape and cannot walk for a long distance.

- not feeling well, in a bad mood

Our boss is out of sorts today so you should wait until tomorrow to speak to him.

- recovering from an illness

The man is over the worst since his skiing accident last month.

pale around the gills

My colleague was looking a little pale around the gills when he came to work today.

The man's father passed away when he was 96 years old.

My grandmother passed on when she was 92 years old.

Three teenage girls passed out at the rock concert.

- to acquire an illness

The boy picked up a cold during the weekend.

- a perfect example of health

The man is feeling very well and is the picture of health.

- to recover from a serious illness

The car accident was very bad and I do not think that the driver will pull through.

- to sell a second set of medicine on a doctor's orders

I went to the pharmacy to refill a prescription for my mother.

- to deliberately make someone's unhappiness or shame or misfortune worse

My supervisor rubbed salt in my wound when he continued to criticize me for my mistake.

- to have a higher than normal body temperature

The girl has been running a fever this week.


The little boy is running a temperature and should stay in bed all day.

- to be in poor condition

My father worked very hard last month and now he is run down.

run in the family

- to be a common family characteristic

The serious illness runs in the family of my friend.

- to do some medical tests on a patient

The doctor decided to run some tests on the patient.

show signs of an illness

- to show indications or hints of an illness

The man was beginning to show signs of some kind of illness.

- to remain in bed while you are sick

My father was sick in bed for three days last week.

- to throw something up, to vomit something

The dog spit up the button that he had swallowed.

I have been suffering from a splitting headache all morning.

- to easily get some kind of illness, to likely to become sick with something

The young boy is very susceptable to getting a sore throat.

- to be absent from work and still receive pay

I did not feel well yesterday so I decided to take a sick day.

take a turn for the better

- to begin to improve or get well

The medical condition of my uncle has recently taken a turn for the better.

take a turn for the worse

My aunt took a turn for the worse last week and she is now in the hospital.

The boy had to take his medicine before he went to bed.

- to measure the beats of a person's pulse

The doctor took the patient's pulse when she arrived at the hospital.

The nurse took my temperature when I went to the hospital yesterday.

a taste of one's own medicine

Our boss got a taste of his own medicine when people began to treat him badly like he treats others.

The woman threw up after eating the bad shellfish.

My boss has been under the weather all week and has not come to work during that time.

- healthy and moving around, not sick in bed (usually this is used after an illness)

My uncle has been up and about for a couple of days since he left the hospital.